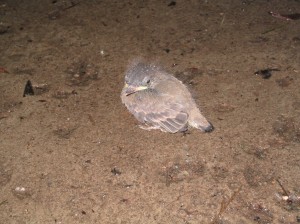 But whatevs.  This is about critters.  The ones in the garage.  The reason they get in is because the door is open.  A squirrel managed to find a home in there.  I don’t know it is actually living in the garage, but it sure likes hanging out in there.  It has recently discovered how wonderful the garbage bags are.  “Get a load of these things,” I imagine it pondered. “They are filled with plastic packaging, some of which has slight amounts of food residue stuck to it;  I think I’ll gnaw large holes in the bag so I can lick the salsa jar lid.”  Our food waste goes into the compost so there isn’t much for a squirrel to snack upon.  But that doesn’t stop it.

Yesterday I started moving our wood from one wall to another.  This seems to bother the squirrel.  Hey, squirrel, chill.  This isn’t your wood.  Clean up the mess you made with the garbage and maybe I’ll let you hang around.  Until then, you can find a tree.  And by the way, stop licking the grill.  Just because I’m lazy doesn’t give you license to lick that either.  I think that once I move the wood, the squirrel will just move into that pile.  We need to get that door fixed.

Once spring began we also had a phoebe family move in.  It made a nest in the rafters.  This meant we had to leave the door open so it could get out.  And in.  Then it had some chicks.  The other day, the chicks fledged.  One of the chicks was hanging out on the garage floor.  It left the nest but hadn’t quite figured out how to fly yet.  It was there for a while.  After dark it was gone.  I hope it didn’t get snacked upon by some noctural predator.  Especially after leaving the door open that whole time.  It was cute, that baby bird.  I guess that made up for its parents crapping all over the cars and the lawnmower and firewood.  And the garbage bags.

The phoebes have left, now that the chicks are off to better things.  Now they hang out in the birch tree outside my son’s window, keeping him up late and waking him up early.  At least they are out of the garage.  Now I just need to convince the squirrel to take a hike.  Once I stop being lazy, and decide that paying for someone to fix the door is a priority, it will be easier to keep out the critters.  I guess I’ll have to live with the squirrel until then.  At least it isn’t in the house.  With my record of door fixing procrastination, let’s hope the front door stays intact.