Last night we slept out in our tent next to the house. As we had the previous two nights as well. Apparently, this has become a tradition of sorts. This makes three years in a row for that activity on Memorial Day weekend. I woke with a sore back to the smell of smoke. The smell was faint at first, but got stronger. It was not worrisome. It smelled like a neighbor had a fire lit to ward off the morning’s chill. The temperature hovered around 50 degrees last night.

It turns out there are a series of forest fires in Quebec. The northern wind has been blowing the smoke our way. It seemed misty this morning but the sun should have long since burned off that business. What lingers is smoke: 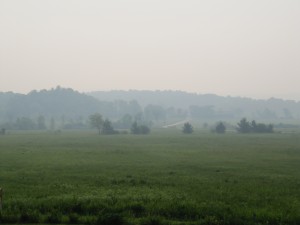 We’ve got some poor air quality for this Memorial Day. The wind is forecast to shift later today, so things should clear at some point. Maybe in time for the parade in Vergennes late this morning. In the meantime, no panting allowed.