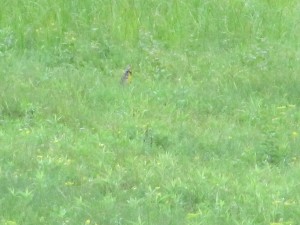 Blurry but an Eastern Meadowlark Nonetheless

When we moved off the mountain to our home in the valley a few years ago, it gave me a chance to learn some new birds. I knew most of the birds I saw and heard when we lived a couple thousand feet higher, but those birds do not live down here. I learned the bobolink, flitting about the fields, and was happy to know they were fairly abundant. I learned the song sparrow. I got to know the barn swallow. This year I heard a song I had been missing, either because it was not there, or because I simply wasn’t paying attention. I thought it was a meadowlark.

So I looked it up with the power of the internets. Sure enough, at the Cornell Lab of Ornithology and its All About Birds web site, I checked the song I was hearing with a recorded one. Eastern Meadowlark is what we had. I kept looking for them and not seeing them. I would hear the yellowish rascal but not see it craftily hiding in the tall grass. See See SEE-yeer. I saw one today, however.

I sat drinking my foamy coffee drink, eating raspberries and peaches with yogurt and granola, when I heard the call. I mean, I literally heard the call, of the meadowlark. So I scanned the field with binos and eventually saw the little dude poking his head up and singing. It kept popping up and down in the grass but I got a good enough look to get a visual confirmation of the species.

Meadowlarks are ground nesters, so now we have a dilemma. We plan to cut the field more than once this summer but I would hate to destroy a nest. They take around 4 weeks from laying eggs to the young flying solo, so I guess as long as we give over a month between cuttings we might save a nest or two. Or maybe not, depending on the timing of things. First bobolinks and now meadowlarks. These field nesting birds make for some mental figure eights. We want to cut the field to provide, eventually, hay for local cows. We also want to cut it to reduce the amount of wild parsnip we have. That plant pretty much takes over and is a nasty invasive that can cause terrible skin burns, so we want it gone from here if we can help it. But the birds…

I do not want to drive away the meadowlarks (or bobolinks or song sparrows) but I do want to cut the field. We will have to monitor the birds to see that we do as little damage as possible. It is good to know that these birds are definitely here. I would hate to push them out just as I am getting to know them.