I picked the popcorn today. Last time I planted popcorn, two years ago, I picked it on the 22nd of September, but this was ready to go. It was nicely dried and the stalks were starting to fall over. I planted the same variety as last time–Tom Thumb, a miniature variety with four foot tall stalks–but the weather was just not the same this year.  With the help of my daughter I picked 69 small ears. 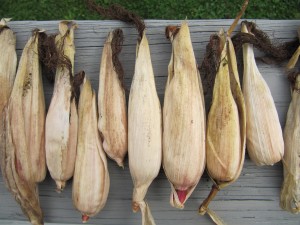 Popcorn off the Stalk

Both my kids helped me shuck it. My daughter noted several times that the ear she just revealed would the be the perfect size for a doll, although it would have been less tasty than the corn we purchased from the Conant farm (whose last day was today, and we missed it). After peeling back the husks, we ended up with a pile of golden ears.

Each Ear Equals One Batch of Popcorn

Last time I bagged the ears in a mesh bag and left it to dry for a bunch of weeks. The children were so excited to start collecting it in a bowl, however, that I totally forgot in my own excitement. So we took it off the ears and we marveled at the bowl of kernals. It will need to dry more, indeed, but in a mesh bag that is hanging in the right spot, that should happen easily.

This Will Warm Us on a Winter Day

It was easy to grow. The hardest part was keeping the birds away long enough for it to sprout. They love to yank it out just as it pushes green from the soil. The first time I grew it I had to totally replant it. The second time I tried to grow it I did not have enough time to try again. This time I hung reflectors just as the first shots appeared. That scared the crows and turkeys away and I had plants. After that it was just water, weed and wait. I planted melons in between the plants and that worked out well for both plants.

In a few weeks I will test the popcorn to see if it pops well. Once it is I will jar it up to keep the moisture content right and we will have healthy snacks for the winter. And plenty of it.