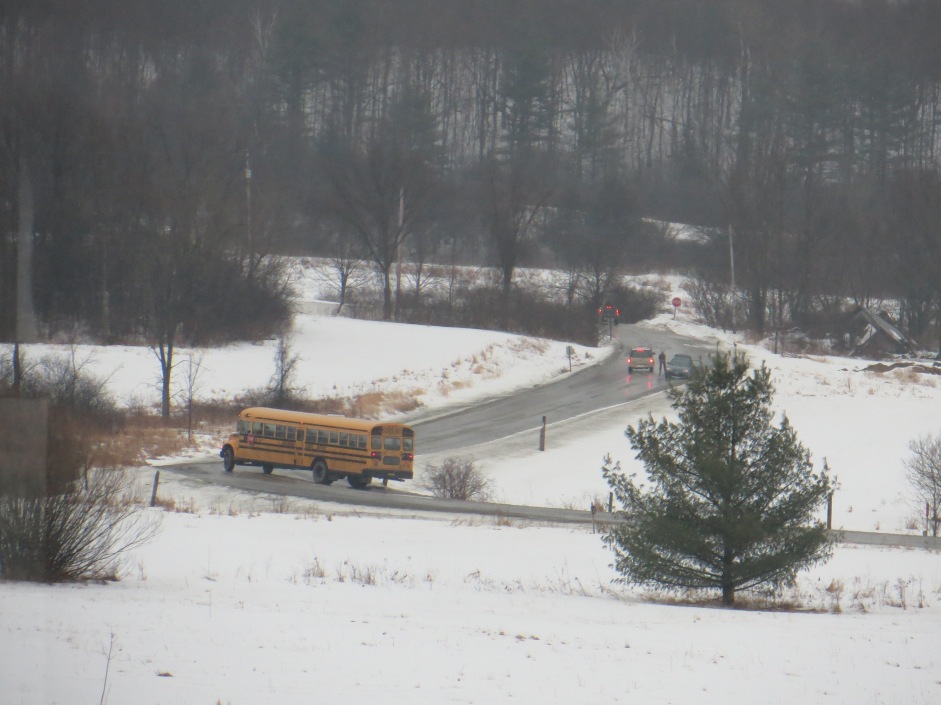 It started raining yesterday afternoon. By evening it was really coming down. The snow turned to mush. Water poured from the roof. It was winter at it ugliest. It was a bit of a mess. But we were snug inside. No problem.

It was still raining in the morning. I did the usual routine to get ready for work. I was sitting at the table, eggs for breakfast, reading something or other and my wife says, “Whoa, look at how slowly the school bus is moving.” I look out to see one car sliding toward the side of the road, then stop. Then I see the school bus emerge from behind some trees, poking along. “Must be icy.”

At the curve in our dirt road the bus starts to slide. Slowly it slips toward the snow-filled ditch. Then it stops. Like slow motion only it really was moving slowly. Now the bus is sideways to the road but can’t move. It is too icy. Tires spin. One car passes the bus (not sure what that was about) then gets stuck on the slight hill. A couple other cars turn around at the end of the road, the drivers seeing what is up. My wife calls the town garage to let them know.

That was why I was late for work. The bus eventually got going, with the help of lots of sand. One of the stuck cars got going. The other was still there, hazard light flashing, when I finally decided to give the driving a go. It was, indeed, icy. I didn’t get to work quickly.

Drama for the morning it was. It is still raining. Freezing tonight. Could be another adventurous morning.