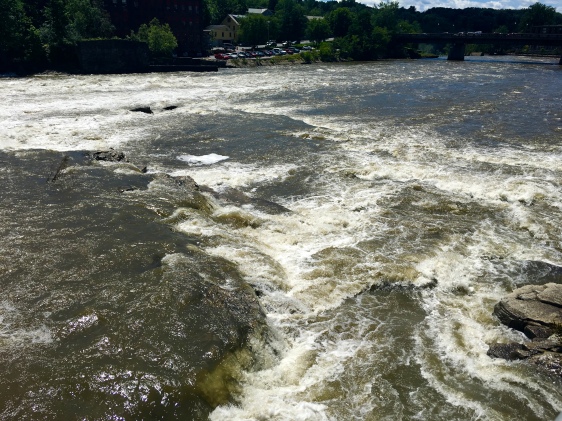 High water on the Winooski River

I was planning to continue working on staining the house siding today. That wasn’t going to happen. I got up early enough. It was not raining, but it was going to rain. I didn’t want wet stain to get rained on. I would have had to stain it again. So I held off. Good thing. The rain came down.

It came down in sheets. Not for long, mind you, but in that short time we got a lot of rain, tossed around by strong winds. The forecast called for rain throughout the day and we got a few more bursts like that. Staining will have to wait.

I was away for a good chunk of June. My son and I were in New Hampshire last week. My wife was home and reported heavy rain, enough to flood our road, which I have never seen. Three inches of water fell in as many hours. That was mid-week.

My son and I came home on Saturday. As we headed west to Vermont it started to rain. It was a hard rain, so hard we slowed to a crawl it was so difficult to see. Once the rain let up a bit we kept going, slow but steady. We passed route 25A and I considered heading across that way, but decided to try 25C, farther north. But shortly after we turned onto that road we encountered a ROAD CLOSED sign. Maybe we should have taken 25A after all, I thought.

But at 25A we found a couple of rescue vehicles blocking the road. They were not there when we had passed the first time. I asked the man there if the road was blocked due to flooding. “I don’t think you’ll float,” he said, looking at our van, before adding that several other roads were closed. That was good information. Hopping onto the wifi at the store down the road (no cell service to be had), we chose a long route around. It took about three extra hours to get home that day.

I did get started on staining the house this week. We had a few days of sun. Yesterday I had to stop early. A thunderstorm moved in. I’ll get it done over time. I have some summer left. Water is high now. The ground is saturated. With more heavy rain like this, we might get more flooding. I hope we don’t get too much.

One thought on “Water this Summer”