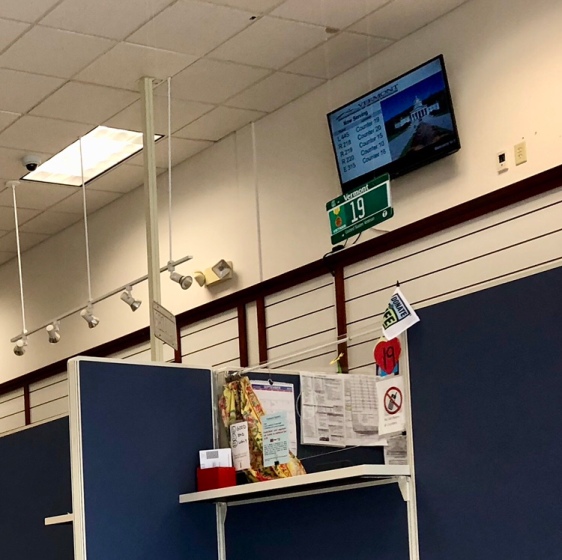 The Department of Motor Vehicles, in most places, has a bad reputation. Long lines, grumpy people working there, uncomfortable seating, crazy wait times. All the stuff that makes people unhappy when trying to take care of something routine that should be easy and quick. But here, that just has not been my experience. The Vermont DMV is easy and quick.

My driver’s license was about to expire. I was going to a conference and was flying to get there. So at some point I realized I could not wait until the last day. I had a window of a couple of hours the other day, so I left work and headed to the DMV. I grabbed a renewal form when I arrived and was only half finished completing it when I got to the head of the line. The woman there cheerily handed me a clipboard and told me to come back over when I was finished. A couple minutes later we met again. I handed her the form, got a number and sat down to wait.

After about ten minutes my number was called. I went to booth 19, cleverly marked with a Vermont license plate, and was greeted, again cheerily, by a smiling man. This guy told me, after I asked him how his morning was going, that it had been expensive. His dog needed surgery so he had brought it into the vet. I suggested that it seemed expensive and stressful, but he assured me with a smile that he would only be stressed if things didn’t work out with the surgery. I mean, I gave the guy a reason to complain and he didn’t complain.

Our visit only lasted a few minutes and, after the four-year renewal was processed, we walked to the photo area and he snapped my photo. I was looking forward to getting a new license since my current one had a terrible photo. Now, I know everyone gripes about their driver’s license photo, but I had never really had a bad one until this one. After another few minutes the woman who originally helped me called my name to hand me my new license. It was really quick. And it was easy.

I was out of there in under 30 minutes. Unfortunately, my new license has an even terribler photo. But at least getting it was a pleasant experience. I don’t mind going to the DMV at all. I might even say I enjoy it. Despite their lack of poor photographers. Something for them to work on, amiright?

One thought on “A fine visit to the DMV”