Before things got started at the Montpelier People’s Climate March

Yesterday was the People’s Climate March. The big event was in Washington, of course, but Vermont had its own sister rally. My children and I, along with a friend of my daughter’s, went down to be a part of it.

We got there early to a busy city. There were baseball and basketball games at the high school, as well as a bike race through the capital. We were an hour early so we wandered a bit before finding a spot on the lawn to watch and to listen. There was no march, even though State Street was closed, so it was more a rally.

A sampling of attendees and signs at the Montpelier Climate March

The crowd was decent-sized but I admit it seemed small after the Women’s March in January. Partly, I think, people are just not as fired up as they were the day after the inauguration. Plus, the Science March just happened last weekend and I imagine many people simply could not attend both. It was a beautiful day. It was a good day to do any number of things. And, frankly, climate change is a fuzzy thing. That is why it has gained less traction than so many other causes. The science is clear but the everyday impact on individuals? Not so much. 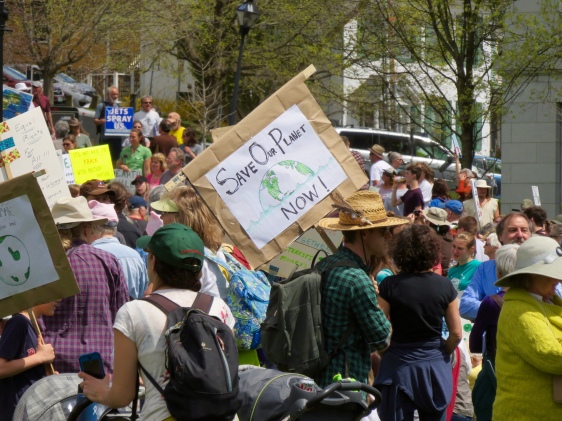 The energy was pretty positive, despite the somber topic. Speakers had the same message: this stuff matters and is real, our current administration is working to make it worse, and we all need to keep fighting to make real change. There were adults and kids, teens and gray-beards. The crowd was pretty white, to be expected in Vermont.

I felt like it mattered just to show up. I wanted to show my kids that showing up is important and that there are other people out there who also care. Climate change does feel like a problem that isn’t getting addressed enough, and, like so many other people, it feels difficult to address on a personal level. But again, just being there to listen and to be around others who understand the gravity of it all seems to help.

It did give me some energy to stay positive and, maybe, to take some action. I mean, if this kid can rally for it, so can I. 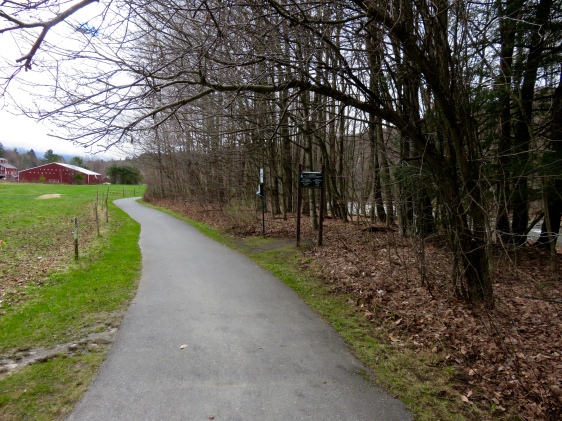 We took a trip up to Stowe yesterday. The last time I was there it was cold and snowy and we lugged our skis to the ski lift to enjoy some turns on the slopes. Yesterday we had bikes instead of skis. Our kids have new bikes. Children keep growing, apparently. The last time they had new bikes was years ago. Those bikes look silly now.

Stowe has a fantastic recreation path–five miles end to end. We rode from one end to the other. That ten miles seemed easy, even though we all were a bit rusty with the bike riding. The air smelled of grass and thawing dirt and manure and cold air slipping away. We wore shorts.

My kids, as one of them said to me, “kicked my butt” by zooming ahead. At the beginning of our ride I was advised by my son to slow down. I guess I slowed down too much. But we all ended up at the same place, and we all enjoyed a ride on a doozy of a fine day. Snow still graced the mountains but trout lilies and wild leeks graced the forest floor. I kept feeling my usual awe at the changing of the seasons. I wasn’t all that worried about getting my butt kicked.

Later, after we had gotten home and had dinner, we went out for another short ride. We rode up the hill and down and over the other way. It continued to be a stellar day. We watched the sun get low and the trees glow golden with their young leaves. We did not rush but we broke a sweat nonetheless. We all felt great when we got home. And we all slept well, ready to embrace another winner of day today. So far, we have not been disappointed. 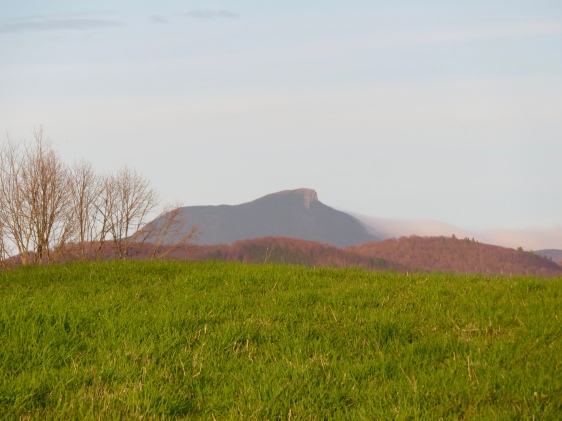 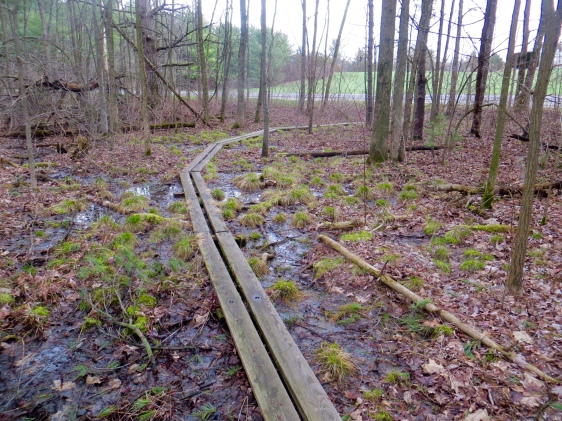 Green is coming out. In the yard, daffodils are blooming, white and yellow. Azaleas have popped. Grass is starting to stand up. Spring? I believe so.

I was up early, out to find birds. Otter Creek was flooded. Ducks were scarce at the usual spot by the boat launch. The boat launch was under water. But ducks were abundant in the flooded fields. Shovelers! Ring-Necked Ducks! Plus Mallards and Canada Geese and Wood Ducks. I saw my first Spotted Sandpiper of the year.

Heading home from the ducks I decided to make an extra stop. I walked through Williams Woods. Ruby Crowned Kinglets sang in the brush. Pine Warblers sang in the tops of white pines. A Carolina Wren teakettled far off. And green, trout lilies included, crept across the forest floor.

Clouds gave way to sun but then came back. It is cool but feels warm after those winter days. Rain showers now. I need to get out and pull some early dandelions and grass that is butting in on the flower beds. I might plant some more flowers. The bulbs I planted in the fall are peeking up through the dirt. Soon the world will be a chaos of plants.

Already I think ahead to mowing the field, in July. The meadowlarks are singing, along with Savannah Sparrows. Woodcocks, however, never came back. That is our spring mystery. Where did the Woodcocks go? Or did that final winter storm do them in? Soon we will crank up the lawnmower, and sleep on the porch, and swing in the hammock.

But now we need to enjoy spring–the dawn chorus, the sweet smell of new growth, the wild leeks in the woods. The world feels and smells new.

Wondrous, that’s what it is. Wondrous.

Months ago we lost the remote control for the television. Who doesn’t do that, who owns a television, right? It falls between the couch cushions. It gets left on the table. It gets stashed in a drawer. It happens. Usually, however, it shows up at some point.

But ours never showed up. We each took turns looking. Those couch cushions got lifted up too many times. The couch got moved so we could look beneath it. The drawer, where we so tidily and responsibly kept the remote, was turned upside down more than once. We looked and looked until we exhausted places to look. It just was nowhere to be found.

I held out for months, then did some research into getting a replacement. I mean, your old television you could get by without a remote. You got up and changed the channel or the volume and you could at least feel that you were not being lazy. But this remote had so many features that trying to adjust some things was a challenge, at the least. Enter a Netflix password without that remote? I guess we skip the movie.

So finally I broke down and ordered a new remote. It was easy to find. There were multiple options on Amazon and elsewhere. When it arrived I slid in some batteries, pointed it at the television and boom! Success. Our easy life was back.

And we lived with that new remote for months. It worked great. No complaints. It was now what we had, even if it looked different than the old one. The old one was forgotten, slipping into the past, as things do. Then Easter came.

My wife pulled the Easter baskets from up-up stairs, as we call the semi-finished third floor of the house. She sorted through the various Easter decorations. She pulled the fake grass from one of those baskets and “No way!” there was the remote. How it got into one of the Easter baskets, fully covered in that fake grass crap, we still cannot figure, but we would not have found it. There is just no way we would have looked there.

So now we have two television remotes. We can choose the one we want. How First World is that? The Easter baskets are again tucked away. In films, those who make them often now hide what they call “Easter eggs:” small jokes or references that can spotted in the background. We had our own Easter egg this year. And it came before Easter, as if risen from the grave. Fitting, no? 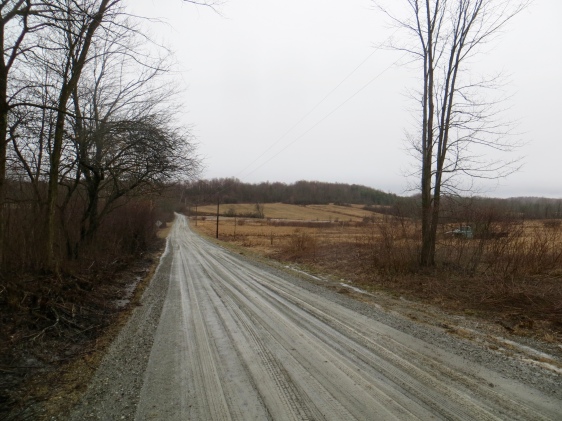 It rained all day. Roads got muddy. Sky were gray. April. A cold rain. Not the kind to spend the day in. Not a summer rain that ends in sun. At night, after the rain stopped, it froze. Mud got icy.

I walked to the river. It ran high. Water gushed under the bridge and under the extra culverts installed a few years ago. Spring rains would flow over the road. They don’t now. They flood the field on the other side.

The fields all along the river were flooded. Shallow ponds formed. Geese and ducks swam and fed. They avoided the river. It flowed too fast. I tried to see what kind of ducks they were. I saw some mallards. The rest hid behind vegetation.

Despite the rain, song sparrows kept singing. I could not hear them as well as other days. Rain muffled their songs. I had a hood on. My boots sloshed on the road. A phoebe, finally back for spring, tried to sing as well.

When I turned back, rain hit my face. There was not much wind, but I walked into it. I pulled my hood lower. Rain fell harder. I looked down again toward other flooded fields. A kestral perched on a leafless ash tree. Its feathers were soaked. I would say it was not perturbed but it seemed to be waiting. I walked past.

I hung my rain jacket to dry. I listened to rain pelting the roof. The lawn, not yet really awake, oozed. Snow lingers in the shadowed spots. It won’t last long. I picked up a book and disappeared.

WHAT THE BLUE JAY SAYS

The Blue Jay does not compare itself

not silence, not darkness, not even

are buried in new snow. Snow

on the Blue Jay, alert

in the sleeping lilac.

In spring it falls between raindrops.

This is the sound of flowers.

The Blue Jay has always known this.

It keeps trying to tell you—

all day shouting and shouting.