For real–it says it right on it!

OK this is not a great photo. I had a hard time getting one that was in focus. But the irony was too much to resist. I found this at the gift shop at ECHO. What would Columbus think of this?

I am a big fan of the Zite app for the iPad. It searches the web for articles categorized by topics you select. In addition to general national and international news I have feeds for gardening, Vermont, brewing and social media. You can get stories about things that interest you quickly and from sources you might not know about. I opened the app today and two articles at the top, side by side, gave me a chuckle. That particular planet gets too much of a ribbing for the unfortunate double entendre of its name.

Both articles, by the way, were interesting.

I have started pulling tubers. Let me say that again. I have started digging up root vegetables. I made some roasted potatoes from the first batch and they were so good I made another last night. Carrots are ready now as well. These are some good ones–a variety of colors and flavors. I should have a good volume of food with these crops before all is said and done.

The first potatoes I pulled up were German Butterball. These were from tubers I had saved from last summer. I hadn’t meant to save them, exactly. I had stored them to eat and then missed some at the end of the bin. They sat until spring, when they were sprouting like crazy. I had some extra space in the garden and so I popped them into the dirt. I am glad I did. They are a, duh, buttery variety, and white. I also have pulled some others–purple and pink. I love that. Who wants only white potatoes when you can have purple and pink? Several of these colorful plants never took so the extra white potatoes were especially welcome.

Check Out Those Colors

I have purple carrots as well, along with yellow and the standard orange. Our soil is mostly clay–although I did add a good deal of compost this spring–so sometimes the carrots get stunted. I pulled three is a row that were stubby. One of them looked like some kind of alien landing craft. Maybe my garden, which is a circle rather than your typical rectangle, was an inviting locale for an extraterrestrial vehicle. Perhaps my carrots are actually buried spaceships? You be they judge. 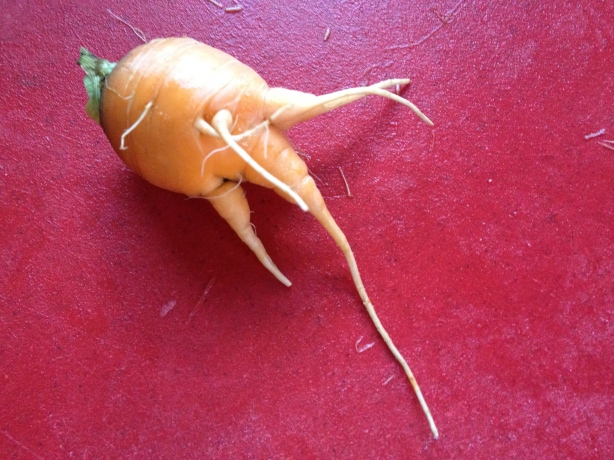 Tall stuff on the left, flattened on the right

I finally finished mowing our field today. We have a new set-up to make this happen–a John Deere Gator and a DR tow-behind brush hog. It worked remarkably well. Once we had all the parts and added oil and gas and started things up, I hit the field and got cutting. But I was stymied more than once.

In the past we have postponed our mowing due to the weather. The field was too wet or it rained when we had the time to cut. Or we didn’t have a tractor with a brush hog when we needed it. We were hoping this would take care of at least the latter issue. And it did, sort of. I started near the end of July. This was perfect. We needed to wait until at least mid-July so that any birds nesting in the field would have fledged. Bobolinks and red-winged blackbirds are ground nesters and we wanted to make sure they didn’t get chopped up in the blades. That is just bad juju. Also, part of the reason we are cutting all this vegetation is the wild parsnip–the stuff has taken over and we wanted to cut it down before it went to seed. That started off well.

Then I had a problem. I got stuck in reverse. I couldn’t get it into drive again. I shook the rig and wiggled everything around and eventually it went into gear. But then it happened again. So we called the dealer and they hauled it away to be fixed. Then, of course, we went away for a week. Two weeks after I started mowing I recommenced. I made some progress but much of the wild parsnip had gone to seed. I needed to get it done. And then, unbelievably, it got stuck in reverse again. Same problem–not fixed after a new shift cable was installed. They took it back and were not happy about it, but fixed it again–bent stick shift this time. They were patient, as were we, and soon the machine was back. Today I got back in the saddle and everything went smoothly. I finished mowing just in time to zip out to pick up my daughter from day camp.

The wild parsnip had almost totally gone to seed–it was brown and dry and sometimes the seeds scattered as I hit the plants. Not good. But those seeds would have scattered at some point anyway. I needed to cut it now and then cut it again later. The key to keeping this stuff down will be (hopefully) to just cut it again and again until it has nothing left to keep growing. It could take a while–maybe years. The good news, however, is that I also was cutting purple loosestrife, another invasive that has been super aggressive in our field. That had not yet gone to seed, so it should be less work to keep that back.

I may cut one more time this fall. That could mean we get more grass than other, more woody, plants come spring. That is good for the bobolinks. They don’t nest in our field much because it has less grass than surrounding fields. Maybe the birds will take a liking to our space and settle down to raise some chicks next year. If I don’t get to it, so be it. I at least will cut again next July and keep those invasives at bay. Unless I have trouble shifting again. But I will worry about that if it happens. For now I can be satisfied that one summer project is finally complete.

I love how there are still scientists out there who will not commit to saying that climate change is at least part of the cause of our recent severe weather. July was the hottest on record of any month since such records have been kept, and the last 12 months were the warmest such stretch. This isn’t a new thing here people. How many times do we get to hear “last month was the warmest on record” before enough of us wise up to the problem. The New York times reported this today, interviewing Jake Crouch, “a climatologist at the agency’s National Climatic Data Center in Asheville, N.C.” They wrote “Asked whether the July heat record was linked to rising atmospheric concentrations of greenhouse gases, Mr. Crouch said he could not draw that conclusion.” I get the impression that scientists are afraid to draw the obvious conclusion not because they are scientists but because they are afraid.

At least three scientists, James Hanson, Makiko Sato and Reto Reudy, have been willing to state that climate change is making a difference is out weather. In their report, Perception of Climate Change, they write:

“Climate dice,” describing the chance of unusually warm or cool seasons, have become more and more “loaded” in the past 30 y, coincident with rapid global warming. The distribution of seasonal mean temperature anomalies has shifted toward higher temperatures and the range of anomalies has increased. An important change is the emergence of a category of summertime extremely hot outliers, more than three standard deviations (3σ) warmer than the climatology of the 1951–1980 base period. This hot extreme, which covered much less than 1% of Earth’s surface during the base period, now typically covers about 10% of the land area. It follows that we can state, with a high degree of confidence, that extreme anomalies such as those in Texas and Oklahoma in 2011 and Moscow in 2010 were a consequence of global warming because their likelihood in the absence of global warming was exceedingly small.

Note the last sentence. They took some heat for this. There are plenty of people who, mysteriously, continue to look (or not look) at the science and fail to see the problem for what it is. I am a bit mystified by what anyone has to gain by perpetuating the “hoax” of global warming. What scientist wants to be wrong? Why claim something isn’t true? In the science community a falsehood will get found out eventually. It’s not like this is a good thing. That is why it is a problem. Sure, you can call global warming a theory and say it isn’t proven. You wouldn’t be wrong. But you can say gravity is a theory, too. Go ahead and tell people that isn’t real.

Anyway, it has been to hot around here this summer. When we get rain, we get a big storm blasting through. Eighty degrees is now a normal daily temperature. That used to be hot, and plenty uncommon for me. We now use an air conditioner at night too often. What gives with that here? It is not just because we are getting older and can’t stand the same old heat. It ain’t the same old heat. Somebody needs to put in a lake at our house.

Call it controversial. Call it a theory. Call it a debate. Heck, call it Fred. It is not going away. It is hot and the weather is crazy. At some point human caused climate change will be a matter of general knowledge in the United States. We’ll catch up to the rest of the world eventually. In the meantime I am going to go make some cool drinks.

UPDATE: Here is another Times article that offers some perspective on the “new normal” with this gem: “it is increasingly clear that we already live in the era of human-induced climate change, with a growing frequency of weather and climate extremes like heat waves, droughts, floods and fires.” That cool drink is going to come in handy. 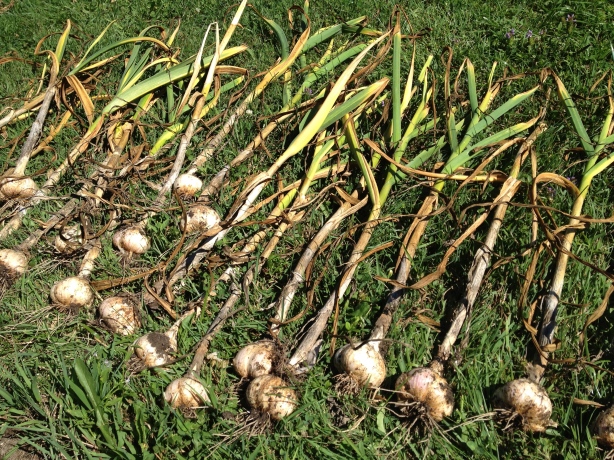 Garlic Drying in the Sun

Yesterday I pulled the garlic. I should have pulled it sooner but we were away and it just didn’t happen. I planted two varieties in the fall and one of them was way ready to yank from the dirt. It was so ready that a few of them broke at the stem. This was the Purple Bogatyr, a purple tinged, smaller variety. The other is much larger and, because I let it go so long, the bulbs are huge. I have 25 bulbs drying in the sun right now and I pulled a couple earlier as well. For the first time a couple died in the spring–not sure why.

I plan to crank out some pesto in the next couple of days, along with some pico de gallo. Hopefully this garlic will last a while–not all year I am sure but a perhaps through the fall. We do eat a lot of garlic. Next up: onions. They are looking good and the tops are starting to fall over. Pretty soon I will pull them as well.