Back in June I planted some popcorn. I planted it later than I wanted but the turkeys, and then the crows, had pulled up all of the sweet corn. I was playing it safe. I hung some old CD’s to blow in the wind and that kept the fowl away. At the end of September (the 22nd) my daughter and I picked it and shucked it. It has been hanging to dry since then.

I tried to pop some last month but it did not work well. It was not dry enough. Today I tried again, heating about ten kernels in hot oil. Every one popped. My son helped me peel the seeds from the cobs. He stripped a few of the mini cobs before declaring “I think I’m done doing this now.” I love his honesty.  I picked up the ones he scattered across the counter.

We did not get too much, just over half a jarful, but it is enough for several batches this fall and (if it lasts) winter.  Here are some visuals of the process this afternoon: 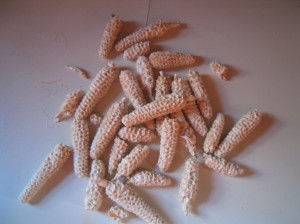