I pulled the last of the carrots yesterday, the last thing to come out of the ground for the season. There were 25 carrots of three varieties. My wife went for a run with a friend and when they returned they had a tasting of all three.  One was sweet, another was really sweet, and a third was almost bitter.  The third one was one I got because it would supposedly mature quickly and last. That it did, but it isn’t know for flavor, apparently. The variety is actually typical in supermarkets. I guess that explains it.

Another friend called later in the morning.  He had baked a whole pile of pumpkin bread and wanted to bring some over on his way to the market.  He was planning to make a stew and was all out of one ingredient–carrots. So we made a trade–a handful of carrots for some fresh warm sweet bread.  He also took the taste test and found the results as the rest of us had.  My daughter also agreed–I trust any kid who tells me a carrot tastes sweet, even if she did have a fever.

The carrots that did not get consumed in the taste test or get shipped to be chopped into stew or get saved to eat raw met a different fate.  I peeled them, cubed them, steamed them, blanched them, and froze them. I was planning to make carrot soup but we still have pumpkin soup left over from a couple days ago.  I can still make soup with the frozen carrots but now I have no rush.  i froze twelve cups of carrots, which seems like a fair amount, although I am sure they won’t last all that long.

I still need to tuck that garden bed in for the winter, now that it contains no more root crops. I edged it and turned it and figured I could just get to it another time.  I forgot about frost.  That still happens I guess. It makes the ground cold and eventually the ground will get all hard and frozen. I need to keep that in mind and get the garden set for the winter.  I have made my leisure. I need to cut that out. At least I have something to show for some of the work.

On the Chopping Block 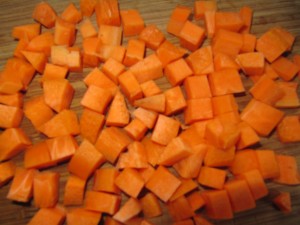 Look at These Orange Puppies