I made the trek to the ferry landing again early this morning to see what birds are still hanging around the open water. I watched the sun rise and got there as the ferry was spinning itself around, trying to break up some of the ice that had formed in the night. It looked like the channel had frozen over, even if it was thinner there. The temperature was 1 degree when I hit the road. The ferry had some ice to break. 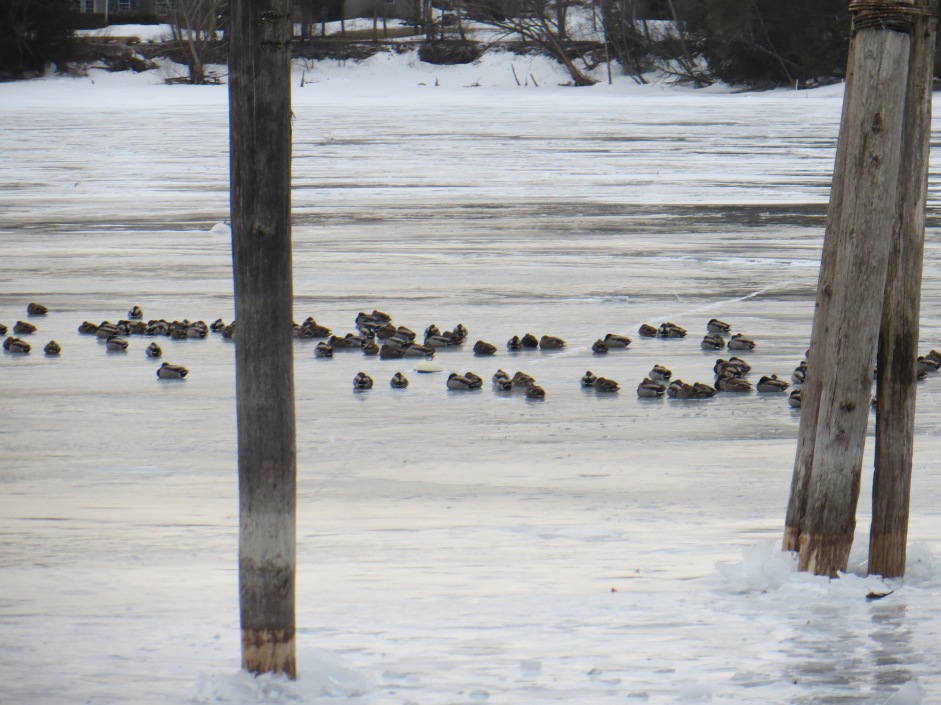 Ducks waiting for the day to warm up

At the lake there was not much open water and a few ducks were swimming and diving down for breakfast. Most of them were sitting on the ice, however, heads tucked under wings in the cold. The wind was blowing hard so it felt mighty cold. The cove there is small. It is curious that so many ducks were hanging out on the windy ice instead of seeking shelter somewhere. Maybe they are safer from predators there.

I did see a common goldeneye in two parts. I noticed its head first–alone in a red ring of frozen blood. It was eerie. Later I noticed its body several yards away. It may have been taken by an eagle yesterday and then left there. Eagles do that sometimes. Before I left, the crows had come in to have their own breakfast. I didn’t see any eagles today.

When the ferry left, the ducks, or some of them, hit the water. Lots of them stayed asleep on the ice. I watched the divers sink and rise, sometimes coming up with shellfish or other items in their beaks. I wanted to find the tufted duck that others have seen here but I was out of luck for a second time. I am guessing, if it is still around, it is over on the New York side where there is more water. I did get to see eight different species of ducks–not bad for one spot.

I may try again tomorrow. With the wind chill below zero today, and likely tomorrow, it is a cold affair. But, again, those ducks won’t be around much longer. It is March, after all, which is the month spring starts. A month from now there should be plenty of water to go around.

Bufflehead and scaups prowling the pylons