Can you see that Savannah Sparrow that landed in that tree?

This morning I volunteered to help look for Bobolinks and Savannah Sparrows. As part of a long-term study to learn about the health of ground-nesting bird populations, the idea today was to look for birds that had been banded in the past. A group of us met at Shelburne Farms, whose fields are a large part of the study, split into two groups, and headed out to beat the grass.

The idea was to flush birds from the ground and to try to see if they had bands on their legs. There are a few types of bands so we got a quick tutorial before we started stomping across the meadows. To help flush birds before we were right on top of them we swished the grass with thin bamboo poles. Once the birds were airborne we could watch them through binoculars to see if anything bright stuck to their legs. Our group headed to Charlotte, to fields adjacent to Shelburne Farms, and right away we encountered Bobolinks. We saw half a dozen, plus a few Savannah Sparrows, but none of them had bands. We tried a few meadows divided by rows of trees and shrubs. Lots of birds but no bands. 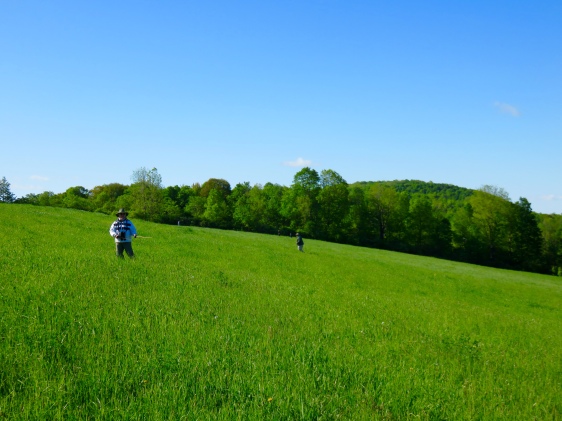 We then drove to another, nearby, field. Their were lots of Bobolinks here, maybe 15-20 of them. There were males and females, flying all over, the males singing like mad. The females have started laying eggs (they lay one a day for about four to six days) and apparently this drives the males a little loony. They burbled and gurgled and chirped away. We all had some great looks at these beautiful birds but again, saw no bands.

So we learned that there are some Bobolinks and Savannah Sparrows in all these fields (the other group managed to find one bird with a band) but it didn’t add much to the data. We did find one Bobolink nest. That was pretty cool. The eggs in it are not being incubated yet, as there were only two of them (they lay one egg per day for four to six days before settling in to get them to hatch); seeing that made the morning worth it. Plus, on the way to one field we all saw a Blue-Winged Warbler, an uncommon bird and one that I had never seen until last week. I even got a photo of that one. No Bobolink photos–I was too preoccupied with my binoculars–but I may get a chance to volunteer again when these folks come back to survey in June. I will try to remember to get photos of the actual birds then.

One thought on “Looking for Bobolinks”