It is November, which means time to tidy up outdoors before the snow falls. This weekend I put away the hoses, stashed the kayak in the basement, put up bird feeders, started moving the compost from one bin to another, and several other winterizing tasks. I also emptied the birdhouses.

This summer we were lucky to have three bird species nesting at the same time, using all four of our bird houses. Eastern Bluebirds occupied two of the boxes, Tree Swallows shacked up in a third, and House Wrens built a nest in the fourth. Things were active. I cleaned the boxes out in hopes that they would again be attractive spaces for nesting when the birds return next spring.

The bluebirds liked the two boxes that are closest to a big maple tree. They like to hop up into the tree and to perch on top of the boxes, back and forth. The swallows prefer the one that is most open, accessible to the open field for their insect foraging. The wrens like to be close to cover, so the nesting box next to the Norway Spruce was just right for them.

The boxes are built with hinged front panels, so they are easy to open. When the panel is closed they are open only at the round entrance hole, the bird doorway if you will. With the panel swung open, however, it is easy to pull those nests out and do some general cleaning up.

I started with the wren nest, which was made of twigs with a softer inner layer of grass and feathers. The swallow nest was compact, made mostly of grass, and covered in bird droppings, which seemed unusual. The bluebird nests were made almost exclusively of pine needles. The odd thing about the bluebird nests was that they each had eggs in them–two in one nest and four in the other. They were clearly abandoned. My guess is that the bluebirds had one successful clutch, then laid another set of eggs too late.

The eggs were pretty cool to see. It is a little sad, to anthropomorphize a little here, to see all that potential life never to be realized sitting in snug little packages. Those little blue orbs could have been bluebirds that flew to Florida or Mexico and then returned to build their own nests. Only humans really care about such things though. The bluebirds do what they can. If the eggs don’t hatch, they simply try again next year. I guess flying up to 2,000 miles twice each year is enough to worry about.

I didn’t scrub the boxes out with soap, as some people do, but I hope our birdhouses are clean enough to be welcoming to next year’s birds. This was the first year that House Wrens nested in one of our boxes, so that was a treat. I hope they decide to stay with us again. Of course, the same goes for the bluebirds and swallows. We may need to open up another box or two, expand the whole operation. We certainly have plenty of room, and waking to the crazy burbling and whistling and chirping of spring birds is well worth a half hour of November housekeeping. 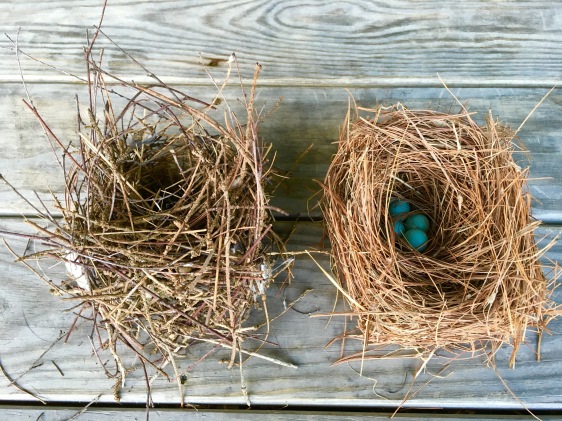