I used to remember my dreams a lot more than I do now.  I think part of that was that I had more restful sleep.  I wake up in the night more often now, and I have to get up, too often, before my body is ready to get up.  But last night I had a dream that was one to mark down.

I was in my house but it was really my parents house.  If you have ever remembered a dream, then you know what I am taking about.  The layout was my parents house but the stuff was of my house.  Anyway, that detail is really just to demonstrate the dream-ness of the dream.  On the kitchen counter was a box of cereal.  The box was labeled “Bowl of Snakes.”

I find it hard to imagine that a cereal named Bowl of Snakes would sell well.  We have a pretty solid irrational fear of snakes here in this great United States.  People kill snakes just for the sake of killing them.  There are snake festivals where hundreds of snakes get slaughtered (such as the Sweetwater Roundup).  So such a cereal would be shunned, I am sure.

In my dream, it wasn’t just the name of the cereal that was reptilian.  Pouring out the box into a large white bowl resulted in a large white bowl of live snakes.  There were three of them:  a rattlesnake of some kind, a striped harmless snake, and a pale green snake with a protruding forehead and seemingly no eyes.  This last one had exceptionally long fangs.

I was in the kitchen with my children.  We watched the bowl of snakes with interest, but not fear.  While we watched, however, the blind green snake stretched intself out toward us, mouth open, to a length of perhaps eight feet.  it was long.  It wasn’t threatening, perhaps just curious about us.  It did, however, startle the children a bit.

We looked away at one point and looked back to find only the striped snake in the bowl.  The other two had disappeared.  We searched all over for them, under the appliances, behind doors, in all the various cabinets.  We failed, however, to find them.  This resulted in lots of questions about what to do.  Should we call someone to help us find them?  Would they be dangerous if found cornered?  Did it matter if we never found them but someone else did?

After searching, we discovered that the third snake had disappeared.  Now there were three snakes missing, although the striped one we knew would cause no one harm.  We searched some more but found no snakes.  Our bowl was empty.  I was proud of my children for not being afraid, simply cautious.  They were curious and not scared.

I am guessing I will never actually encounter a bowl full of snakes, unless I attend the Sweetwater Roundup or something like it (see below).  Even if I do, I will likely refrain from using milk for that bowl of  cereal.  That would just be unkind. 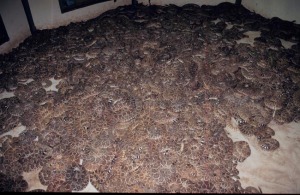