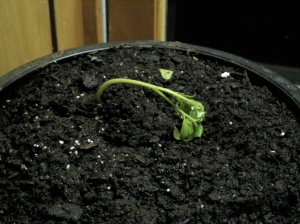 I decided I needed to take some action and transplant our tomato plants.  I thought I might be able to get away with planting once and just popping them into the garden.  But they got too tall and leggy.  They were drooping over from their own height, so I had to move them to deeper soil.  I gave it a shot this afternoon.

I think they won’t all make it.  I have had trouble transplanting tomatoes in the past.  They grow so well in the foam cell jobbers and then hate it when I make them grow up and move out.  I think at least one will make it, probably two.  But two of the four I moved are questionable.  I left another three where they were.  I ran out of time.

They may wake up in the morning.  I tried to be gentle.  I tried to make sure they got just the right amount of water.  I used quality dirt.  But my thumb is, clearly, not as green as it might be.  It was pretty brown after I finished digging.

Here’s hoping that by morning the soggy stems will have perked up.  I would hate to lose future tomatoes.  I am afraid, however, that that may be the case.  Not to be pessimistic, but seriously, one of those puppies looks ill.  I hope it gets well.