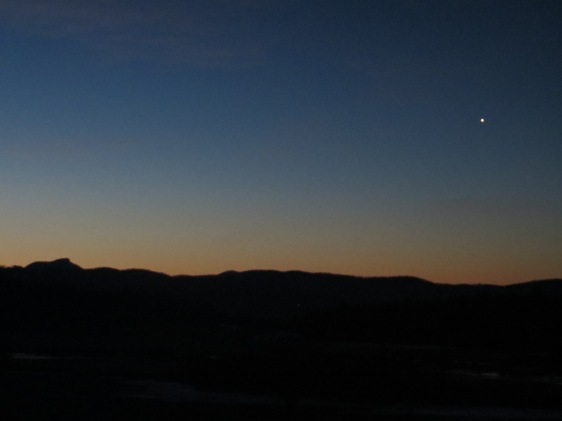 I got up early again this morning. This time of year, especially, I like to get out as the sun rises. I walked slowly and quietly to the river. Robins were singing like crazy. Song sparrows were starting up. A few red winged blackbirds were rattling out to the dim light. Venus pierced the morning glow.

It was cold, about 25 degrees. I knew the day would warm up, but it was winter weather to start things off. The river, which had been frozen over, flooded over the last week. We got rain and warm weather and all that ice melted or flowed downstream. The river spilled out over the fields. Water everywhere. But last night ice started to form again. Sheets built up and then got pushed around. They cracked and smacked and popped into the morning as the river pushed them as it flowed.

Close to the river I cold hear mallards quacking their typical duck quacks. I heard other ducks as well. Wood ducks whistled, and something else made a noise halfway between a quack and a whistle. As I snuck closer I could see waterfowl of some kind swimming close to the bridge. I watched through binoculars and got as close as I dared. Ducks are skittish critters. Turns out the closest birds were hooded mergansers. Here is a pic, poorly taken from too far away in low light with my small camera, but it will give you an image of these amazing diving ducks:

There were seven of them. As I watched them something else made some waves. I watched a beaver part the surface as it swam with a branch in its mouth. A cardinal sang out. The ice snapped. And all through it the sky grew lighter.

I kept trying to get closer to the water and eventually all the ducks flew away. I could see them far off on the bend in the river, and I could identify some of them, but there were definitely some in there I just couldn’t ID from the distance. I listened to the water curl under the bridge. I walked a ways further up the road, listening to the dawn chorus. I heard my first phoebe of the year.

We won’t have many more days of ice, and that dawn chorus is going to get louder and louder. I will be getting out there to great the sun as many days as I can.