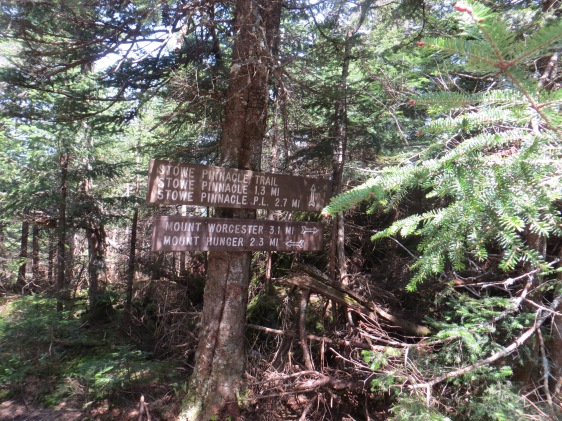 The hike up is not that long but it is a bit brutal. After taking one route up a couple of times I realized there is a shorter and easier route, at least for the first bit of the hike. That shorter route cuts off about a half mile of hiking but still, it ain’t easy. This isn’t one of the highest peaks in Vermont and I don’t even end up on a summit, but I tell you it is a tough one.

I hiked up to the Skyline Trail that connects Mount Worcester and Mount Hunger in the Worcester Range, which parallels the Green Mountains. This was my fourth year doing it and each time I think it won’t be so tough. Each time I am humbled. I hike up there so I can camp out and then get up at 4:00 in the morning to find birds. Most of the birds I don’t even see but simply hear. I know, it sounds silly–take a tough hike to rise super early to find birds you can’t see? But it is pretty great.

This is my 15th year volunteering for the Mountain Birdwatch program, which surveys high elevation birds in the Northeast. You know, Bicknell’s Thrush, Blackpoll Warbler, Winter Wren, those birds most people have never heard of. That is part of why I do it, I guess. To hear a Bicknells’s Thrush sing, which only happens in early summer and only and higher elevations in northeastern North America, is a treat. Most people simply are not going to hear that song. It is a rare sound and something I cherish. It gives me hope each year that things are not as bad in the world as they might be.

The survey protocols require listening and looking early in the morning. The birds sing the most just as it is getting light and a little while after the sun rises. Being high on a mountain as the world awakens, the smell of firs floating over the trail, bird song ringing out–seriously, it is life lived at its most divine. Of course, I also have to take care to mark down all the birds I detect of specific target species, how far away they are, if I saw or heard them, how many, that science-type stuff, but it feels then like I am doing something that maybe matters, that maybe will help to keep these places and moments around just a little longer.

I agreed to take this route after the one I had been doing for a decade had been discontinued. So it goes when scientific rigor comes into play. The old route just didn’t make the cut when the protocols got changed a few years ago. It was a bummer to let that route go but it gave me a chance to see someplace new. I had heard the new route was tough and it was. It is steep and rugged and not often used. It is slippery and sometimes hard to follow. And it is a just a little more challenging with a pack full of a tent and binoculars and warm clothes and a notebook and so on. I have given up on bringing a stove to cook dinner–too much extra weight; I just bring food I can eat straight up.

This year was particularly nice. It was clear and sunny and just a gem of a June day on both the hike in and the day of the survey. There were no clouds and there was no wind. The birds were out. Last year I hiked in and had to abort because it was too windy in the morning. I had to go back and try again the next weekend. This year the weather could not have been more perfect. OK, it was 35 degrees when I started at 4:00, and I did keep my sleeping bag wrapped around me for the first hour, but it warmed up soon enough. I heard all the birds I expected to hear plus another rare one for that area (a Boreal Chickadee) and called it good after collecting some data.

The hike out was tough but not as tough with the gravity assist. Back at the car I changed into clean shorts and shirt, opened the car windows and headed into Waterbury for a slice of pizza. I was tired–not enough sleep and some solid hiking–but I watched the sky turn pink at the beginning of day, and I heard rare birds sing, and for a full cycle of the sun I was immersed in a beautiful place. If my wife could have been there it would have been perfect. I guess perfection will have to wait, for now at least.

Bluebird day on the hike down