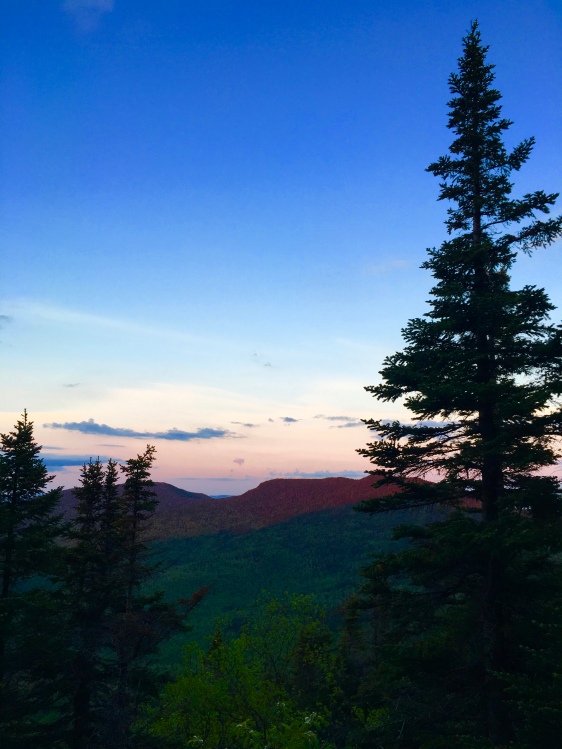 Every day this June I have woken and looked around and felt lucky to live in such a beautiful place. I mean, seriously, the place is just full of beauty. You have your green meadows and rolling hills and bare peaks. You have tractors tossing bales and Barn Swallows zooming over soccer fields and rabbits chewing clover. Wonder everywhere.

Again this June I have been fortunate to participate in Mountain Birdwatch, a research program that examines high elevation birds. Earlier this month I drove to Stowe, hiked up to the ridge trail on the Worcester Range and tried to find some of these birds. The hike up whooped my can, as it always does, but it was worth the effort.

This hike shouldn’t be that bad. It is about three miles to get to the start of the survey route. Three miles, how tough can that be? That is a 5K. I ran one of those the other day. But this is a challenging three miles. The first part isn’t bad. I hiked up toward the Stowe Pinnacle. That is a standard hiking trail–steep but well worn, fairly smooth, stone steps in some places. Once I have to veer off from that trail, however, the trail is less forgiving. It is steeper, with fallen trees across the trail, scrambles over rocks. It is not well marked and paying attention matters. No zoning out and just putting one foot in front of the other. It is slippery and rugged–a solid challenge.

The ridge trail is also not much used and can be wet, although this year it was pretty dry. There is only one water source so I have to try to time it right to polish off my water to fill up and treat what I collect. Eventually, after I think several times that I must have passed point one, I finally get there. Now I don’t want to be some wussy complainer, but it is a tiring little walk with a full pack (tent, sleeping bag, food and so on) on a steep trail. Or maybe I am just not in my twenties anymore. 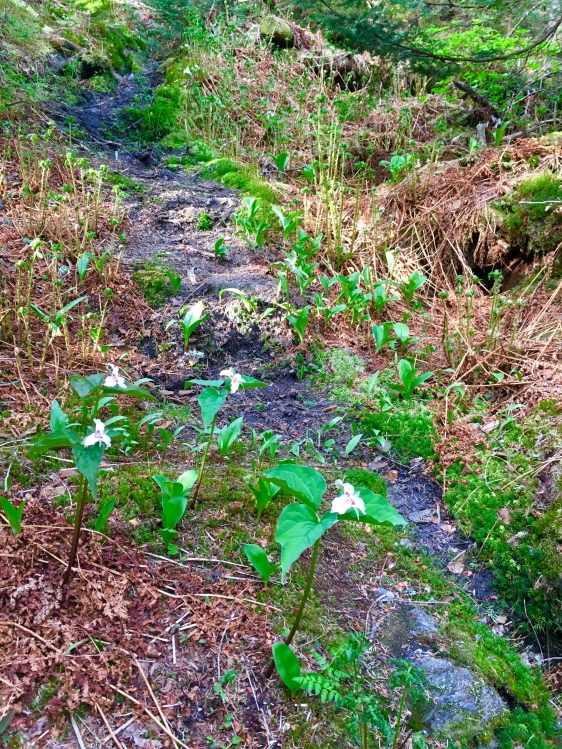 As in years past, I scouted the route and counted spruce and fir cones that day, after I set up my tent and left some stuff behind. There were Trilliums and Trout Lilies but there were also black flies. I have not seen black flies like that in years. More than once, as I tried to aim my binoculars at tree tops to carefully count cones (this is part of the survey because red squirrels eat the seeds from cones, and when there are more cones there are more squirrels that survive the winter; since squirrels also raid bird nests for their eggs, the number of cones can be an indicator of bird populations the following year) I said aloud, “I don’t think I can do this!” I was, however, not a quitter. I counted my cones, ate a little something, and crawled into my sleeping bag.

The next morning, rising at 4:00, I had a successful survey. The black flies slept in so I was free to listen and watch and take notes on what I encountered. I found more squirrels up there than ever before but I also heard Bicknell’s Thrush, probably the most important target species, at every survey point. Once I had completed the survey, about four hours later, I took some time to linger. It is beautiful up there, even with limited views, and it smells good. The spruce/fir forest in summer is an olfactory opiate.  It smells like spring after a long winter and Christmas and summer camp and childhood and Life.

I took my time hiking back down. I swatted flies and ran out of water before the stream. I listened for warblers. I soaked in the beauty of the place. Back home, I took a nap. Then I sat on the porch and looked out over the fields. The grass rolled in waves in the wind. Kingbirds snatched insects from the air. Wonder everywhere.