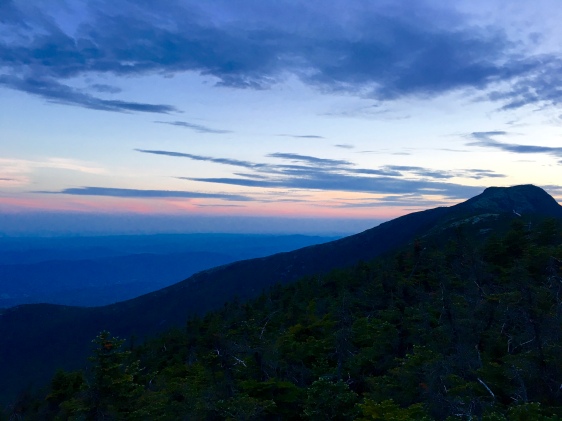 For the first time since 2000, when I started volunteering for ﻿Mountain Birdwatch﻿ surveys, I have not been able to complete a route. I went up to Mount Mansfield this week, spent the night, but had to call it quits with too much wind in the morning. When this has happened in the past I have found time to go back and try again. This year I just won’t be able to do that. Rough. Not only do I not have the benefit of doing it, but someone else will have to cover for me. I guess, however, that with multiple routes over all those years, it was bound to happen.

It was not a waste of time. My son came with me this year. We drove up the road to the visitor center and parked at the ski patrol hut. Vermont Center for Ecostudies, who hosts the study, has been given access by Stowe Mountain Resort to stay the night at the hut. We hiked from there up to the survey route where we completed counting spruce and fir cones as part of the survey. We got to get in a good hike and see some fine views. We watched the sun drop low in the west from the ridge, just the two of us there.

Walking back to the ski patrol hut we watched the full moon rise while we heard Bicknell’s Thrush and Swainson’s Thrush and Winter Wrens and Robins singing. It was a beautiful evening and I felt grateful to be up there.

We slept little but rose at 3:30 anyway. The forecast called for light winds at that hour but the winds were not light. We sat for twenty minutes at the first survey point in the mostly darkness, looking and listening. We heard some birds but the wind made the results questionable. We headed toward the second point and stopped before heading down the challenging part of the trail. We waited. There are only so many hours in the morning and I did some math. Unless the wind died right quick we would not be able to finish by 8:00. The wind did not cooperate.

We walked up to the ridge. We watched the sun rise, just the two of us up there. Then we split. In Stowe we ate, groggily, some hot breakfast at McCarthy’s. The home fries were some of the best I’ve had. So it was a great day–time with my son outdoors in a beautiful place, plus great home fries. That’s a win. And the survey? Someone will volunteer. And I’ll be back next year. My son even said he wants to come back with me. Like I said, a win.

One thought on “Mountain Birdwatch: Blown Out”