Leafing Through the Catalogs and Guides

OK I know, we just got our first winter snowfall to speak of and I am thinking about spring already. But the time has come. I mean, it is January 17th. Last year I busted out my seeds and seed catalogs a week earlier. I pulled the bin of seeds from last year and years before that, spread out the seed catalogs and started doing some planing. I got interrupted several times so it took me most of the day, but I I figured what I need to order for our 2012 garden.

I have plenty of seeds, but I can’t use them all. The Danvers carrots from 2007 are just not reliable. Some might sprout but most likely will not. Lettuce seeds from last year? Might be good, might not. Pumpkins seeds on the other hand, saved even from 2007, will probably be OK. The big ones last longer. I had to determine what I want to plant, then go through my inventory, then decide where to purchase seeds I don’t have but want.

Mostly I plan to order seeds from High Mowing Organic Seeds. They are fairly local, so if they can make it grow, I probably can as well. I will also order some from Seed Savers Exchange. I love the work they do and they always have something new and different. I prefer to plant open pollinated varieties rather than hybrids, so it is fun to try something new each time. Potatoes, especially, are fun ones for me when it comes to experimenting. They are pretty easy to grow, and any variety will taste good one way or another, so why not try the pink ones? Of course, I have tried some varieties of vegetables that were not the greatest–red zebra tomatoes looked great but just didn’t taste as zowie as I wanted them to taste, and some carrots are so not as sweet as others–but mostly you can’t go wrong with food you grow yourself.

I had hoped to order seeds today but that will have to wait until later in the week. I had way too much playing outside with my daughter to do. The kids were outside a ton yesterday and today, despite the frigid temperatures (yesterday never got above 7 degrees and today the wind chill was below zero in the afternoon). I was proud of them. I didn’t want to be left out. And I do have time. I will likely plant some seeds indoors in March, which isn’t that far away, but I don’t need to order anything two-day shipping at this point. But still, it is hard to resist thinking about summer when the temperature is in the single digits and the wood stove is eating up logs.

So here’s to seed catalogs and the companies who print them! Thanks for bringing me a little summer today.

Made a garlic braid tonight for the first time. It came out pretty fair. I have another batch still in the ground, but I dug up the rest of this variety since, A: it has been ripe for the plucking, and B: I needed some anyway to make pesto. I whipped up two batches and popped them in the freezer–that ought to hit the spot come January. Can I say that it is amazing that I planted single cloves and they grow into plants with whole bulbs? That is my theme of the summer–amazement at how plants grow from seed to food.

So here is my garlic, now hanging over the sink to keep the vampires away. 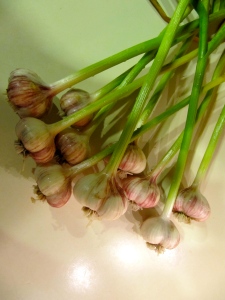 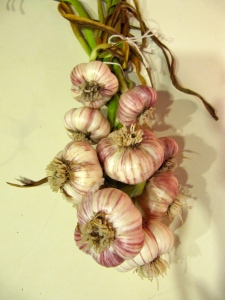 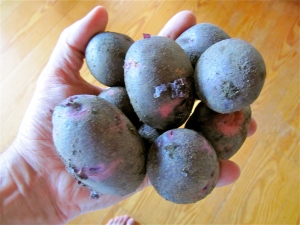 A Handful of Beauties

I made a summer gratin last night–fresh zucchini we picked yesterday, onions, tomatoes, garlic I dug up right before mincing, and potatoes. I had asked my wife to grab some potatoes at the market when she went out. She came home without them, however, as there were no local tubers to be had, and she just couldn’t bear to buy some from California in the summer. So I had the thought that I might find a few out in the garden. I was richly rewarded.

Let me say that the gratin came out well. Hot and saucy and flavorful, with fresh herbs in the mix. The potatoes were the game maker, however. I stuck my hand in the dirt and–BOOM!–potatoes. One plant yielded all I needed, and we have many many plants. We will not have to purchase potatoes for a long time. While I was washing them and parboiling them and slicing them and then eating them, I kept thinking how incredible it is that one can pop a chunk of root into the ground and it turns into a plant that yields ten times what you planted.

These pictured are Purple Viking. I also planted Yellow Finn, which are white. I will go out soon and dig up some of those to see what we get. I’m thinking breakfast tomorrow, maybe, some home fries with eggs? That could work.

Still, I am amazed at how I can plant something and it grows and then we have food. I paid a total of 30 dollars for seed potatoes. I will without question get my money’s worth. If I save some of them to plant next year, I will double my investment. For the moment, however, I don’t want to think about next summer. I just want to savor the yumminess of this crop. And have a great breakfast. Or two or three.

A bit ago I posted about transplanting tomato plants from small to large pots.  One of them in particular was not doing well.  It sagged.  It hung low.  It looked poorly.  I thought it would kick it.  But check this out:

The plant on the left is the same one that was all droopy before.  A little water, a little sun and bam!  Healthy(ish) plant.

I still am not ready quite yet to pop them in the ground.  Rain showers are forecast for the next four days.  And it is cool.  These puppies like it hot.  Some time this week, hopefully, I will start exposing them to the outside air.  They need to get some experience before they get to the work of growing tomatoes.

I am hopeful that we will get some fruit off these bad boys.  If only it didn’t take so long.  I suppose, however, that that is part of the joy of it–watching fruit burst from a tiny seed.  So I can be patient, even though I can almost taste what will come.  A juicy red slice on a hot summer day?  Now we’re talking.