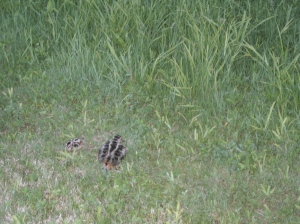 Visual of the Elusive Critter

Last weekend I drove down to New Hampshire.  When I left on Friday I grabbed two things to pop into a mailbox, one of which was a DVD from Netflix to be returned.  I figured I would pass a mailbox at some point.  I picked up a friend to ride together and, once we got conversing, I totally forgot about the mail.  We arrived at our destination and I had to leave a random object (in this case a tin of mints) in front of the steering wheel to remind me to find a mailbox on the way home.

The tin of mints did its job.  It reminded me that I had left the mail under the seat and dutifully took it out to mail on the way home.  Since my friend and I rode home together again, however, I repeated my forgetfulness on the return journey.  I got home and the mail was still in my possession.  I dropped it in the mailbox to be picked up by our carrier the next day.  It was Sunday.

We had been watching the Indiana Jones series–four in a row was the plan.  We had watched the first three and the most recent, from last year, was on our itinerary for that Sunday.  The children fell asleep and I noticed that the disc I thought was the one we wanted was sealed in its return envelope.  I figured we had sealed it up by mistake and realized that it was the third movie.  I had put the wrong one in the mailbox.  At this point I was thinking how glad I was not to have found a mailbox it after all.  I would have sent away the film we were hoping to see.

So I headed down our long driveway to the mailbox.  It wasn’t dark yet, but it was getting there.  My wife had cut the lawn earlier in the day and I noticed a dark smudge on the edge of the driveway where the grass was newly clipped.  I wondered if she had run over something–some bark or old leaves or some plastic bag type item.  As I got right up to it, however, I realized that it was nothing that the lawnmower had mangled.  It was a snipe.

I had never seen a snipe, but I had seen photographs, and I had seen woodcocks, which look similar.  It is a small bird with a long thin beak, colored to blend in to the grass and about the size of a robin.  I have heard snipes many times and, to be honest, I have seen them in flight, way up against the dim sky.  They have a funky mating display in the spring where they make eerie low whistling noises at the tail ends of the day.  They are either hiding in the grass or too difficult to see clearly, since they fly typically when the light is low.

So I was pretty ecstatic to see one of these puppies.  But it was not alone.  It had a mottled chick, fuzzy and still next to it.  I walked right up to them and they did not move.  Obviously they were working under the camouflage principal–Don’t move and no one will see us since we look just like everything around us.  Good theory, but since they were on the nipped grass, it wasn’t working so well.  I watched them for a while before continuing to the mailbox.

I assumed they would split when I returned but they were still there.  I watched them again for a while and they did not move.  I felt like I would stress them out so I split.  Then I thought I might get a photo, so I dropped the red envelope, picked up my camera and headed back down the driveway.  My spouse was on the phone so she missed out.  It was still there, so I took a couple of poor photos, getting as close as I dared and zooming in with our lame zoom lens as close as it would go.  I took four photographs, all of which, how to say this simply, suck.

By the time my wife was off the phone and tried to find our avian friends, they had decided to find some taller grass.  She was out of luck.  I would say at least I had the photos, but they were not much help.  So the lessons here:

Father’s Day is coming up.  Maybe I will drop some hints about that camera.  The movie, by the way–Indiana Jones and the Crystal Skull–was pretty good.  They managed to bring our hero back as a much older man in a believable and fun way.  The story itself may not have been believable but hey, it’s just a movie.

If I had a Twitter account this might be a good one for that forum.   The grown-ups in the house watched the first half of the fourth Harry Potter film last night.  It got too late to watch the rest.  It is in the works, queued up for part two.

Last Friday was May 1st.  For 15 years, with two minor exceptions, I have given my spouse flowers on that day.  One exception was last year.  I am not sure what happened but I forgot, so I pushed it out one month.  June 1st is as random a day as May 1st.  The other exception was when I waited until the last minute and it was Sunday.  I had to wait a day that year.

We met at the end of April, 15 years ago.  That is a fair chunk of time.  I get her flowers both to suggest that I have been thinking of her and that I love her, as well as to, at least for me, commemorate when we met.  We did not meet on May 1st.  That was just the day I picked that was close enough.  Plus, if I don’t remember, no big deal.  It isn’t a specific day, just a time to remember and celebrate.

The thing is this:  I think my wife is amazing.  I love her like crazy.  I think she is one of the most beautiful women I have ever met.  If it didn’t sound like I was exaggerating, I would say that she is the most beautiful woman I have ever met.  She is a terrific mom and a great friend.  I am truly lucky to have met her, and I am fortunate that she is willing to keep things going.

I used to get her one red rose.  That felt pretty romantic to me.  I have expanded since then.  I got her a whole passel of roses after ten years.  Now I get a mix.  This year it was pink roses and gerber daisies.  They brighten the place up.  A couple of years ago I decided to make flowers a part of life.  So one rose seemed too insignificant.  A bouquet had more punch.

And so we stay at it.  My parents have been married for over 40 years.  My wife’s grandparents have passed 60 years.  I am hoping, if the cheesecake doesn’t do me in too soon, that she can bear me for that long.  I am hoping that flowers (at least) once every year makes a difference.

My wife is an educator and, come winter, is seriously crazy about following the weather for the purposes of discovering the perfect convergence of snow/sleet/ice/cold and a school day.  This ideal scenario means, of course, a snow day.  She only works part time so the quest to find this meeting of the weather and the educational system has even more significance than it would were she to work full time, as there are fewer days on which it might happen.

I have some of the same feelings, I admit.  A snow day makes me feel like a kid.  That feeling of another day in the old classroom, suddenly turned into a day romping through the drifts of white, now that’s something to celebrate.  Having my own children these days, I get to experience a little of that all over again.  Plus, I get to do some romping now and again myself.

My wife, however, gets way more excited than I do.  This is a reflection, perhaps, of my own surliness.  Or maybe I just have a little bit less hope, or I hate to get disappointed if it does not happen.  In any case, she keeps me up on the latest.

This morning had real potential to be a snow day.  It started snowing last night and was falling heavily this morning.  The forecast was somewhat squirrely, so it had been continually updated over the past week as a couple of systems converged on us.  As of last night, it looked good for some poor travel.  Poor travel conditions are the key element to the snow day.  School gets cancelled if it seems unsafe for buses to make their way along the slippery roads.

Not only the severity of a storm has to be right but the timing has to be right.  If the roads can get cleared in time, well, forget missing a day of school.  It was seriously a tough call for those school administrators I am sure.  I wouldn’t want to be in their shoes.  If you cancel school, some parent complains that it was fine and their little Einstein missed another day of fractions.  If you don’t cancel school, some parent complains that their kid had to risk his neck just for another day of fractions.  Not an easy business.

You might have guessed by now that we did not have a snow day today.  Frankly, that isn’t a terrible thing for me.  Making up a snow day is big fat hassle.  That doesn’t mean that I don’t enjoy it.  It just puts a thorn in my tender side.  My wife, as you can imagine, was not exactly thrilled about this.  She even got a tad grumpy, but don’t tell her I said so.  Every school in the state, except for a few here in Chittenden County, was closed.  Apparently, they like to play it safe, while here in Chittenden County feel the need to risk a bus full of children in a ditch to keep the moaners at bay.

Don’t get me wrong, we have some stellar bus drivers around these parts, and I would trust them to make safety a priority.  It’s just that, couldn’t we have a snow day?  That would be so much more fun.  My wife certainly thinks so.  I am not home at the moment and I need to travel to get there.  It is snowing, ice covers the car.  It is slick as a booger rag.  But even if it were 6:00 am, I am sure schools around here would still be open.  Too many little Einsteins to educate.