Before Sunrise from Burnt Rock Mountain

For the second time this week, I got up early, drove, hiked uphill for a ways and then sat in hopes of finding some birds. Last year I had volunteered to do a second survey for Mountain Birdwatch, sponsored by the Vermont Center for Ecostudies. I agreed to do it again this year. I packed up the night before, and readied the espresso maker, so all I had to do was rise, brush my teeth, quickly brew some java and head out the door with my backpack. Other than trying to stay quiet so I don’t wake everyone else, the biggest challenge is just getting up. I had to set the alarm for 12:45. It was barely today when I turned back the blankets.

I managed to get out quickly, however, hot coffee in a travel mug (Americano, with cream) next to me in the cup holder. I had planned for extra time, although I did not need it, as the forecast was for heavy fog. I passed through some fog but I drove over Appalachian Gap on Route 17, so I was higher than any fog for a good chunk of the time.  I started driving at about 1:00 and started hiking about 2:15. I was, as you might imagine, the only one on the trail.

My headlamp guided me, and I did feel a little tired. I was up at 2:00 on Monday morning (shorter drive for that survey route) and I stayed up way too late to watch a movie one night (Sherlock Holmes–too good to watch halvsies) so I wasn’t as perky as I might have been. I got to the Long Trail in about an hour and 30 minutes later I was on the top of Burnt Rock Mountain.  I had 15 minutes to spare before I could officially start at 4:00, so I donned some warm layers, lay against my backpack on the warm stone, and waited. The wind was gusting pretty strongly but not so much that I would not be able to hear birds songs. The stars were out. Jupiter dangled in the eastern sky like an earring. The horizon just hinted at the day to come.

I could have fallen asleep. I had to make sure I kept my eyes open. At four I pulled out my notebook to get started. But no birds were singing. So I waited. Nothing. Was it the wind? I waited until 4:25 and the first bird I heard was the one I most wanted to hear–Bicknell’s Thrush. At that first survey point I heard three of them.

Here is the thing. Some people get excited where their team gets a home run. Others get excited when they win at horseshoes or craps or softball. Some get fired up by nightlife. I get elated when I hear a Bicknell’s Thrush singing. It lifts me up and smacks a huge smile on my face. These little brown birds face a lot, from habitat loss in both their and summer homes, to distant migrations, to acid rain and climate change, so to hear that they have returned for another summer brings me pure joy.

I head them again at the second and third of five survey points. It was peaceful in the woods. I heard many birds, despite the wind. I heard plenty I was not seeking. In fact, I heard a long list of birds. On my hike overall I heard (I only saw a couple of birds the whole time, flying away from me in terror of my fierceness I suppose) these species:

I might have missed a couple here but it was, you might say, a good morning for this citizen scientist. It was a peaceful hike and I enjoyed some time in the woods. And my guess is that I was home before anyone even got to that particular trailhead today. A day’s work, done by breakfast. 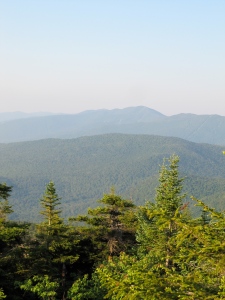